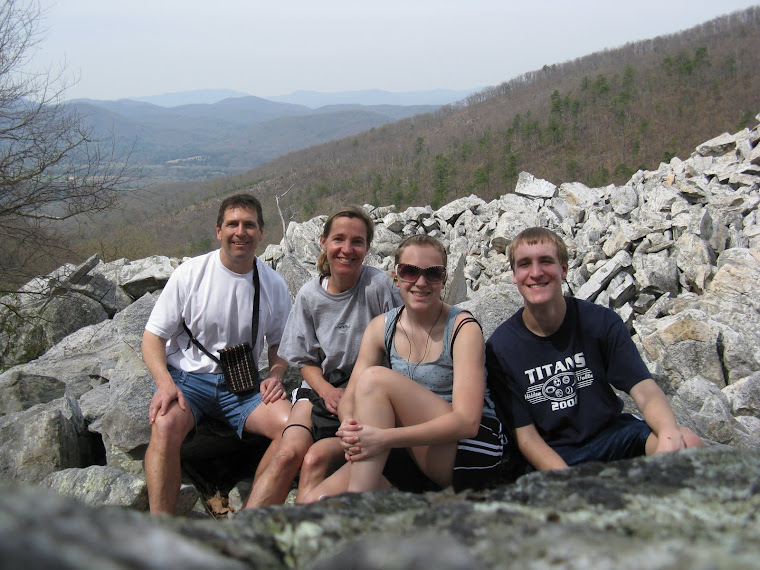 Wow a lot can happen in a few days around here!  We had a very pleasant weekend.  Saturday we went to downtown Roanoke and enjoyed peach shakes at the Peach Festival. We got fresh fruit from the farmer's while we were there. 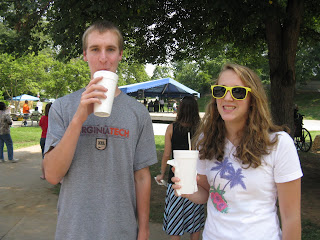 Alli and Zack enjoy peach shakes
Sunday morning began with Alli and Bubba working on (and finishing) a project they began in May-refinishing our old rockers.  It required lots of sanding and then painting of a base coat and then finally a new fresh coat of paint.  They selected the color together.  Here are the before and after pictures: 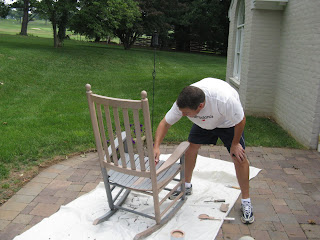 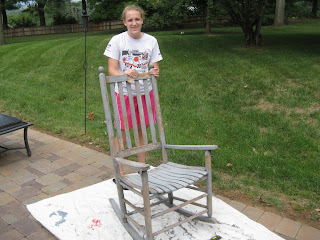 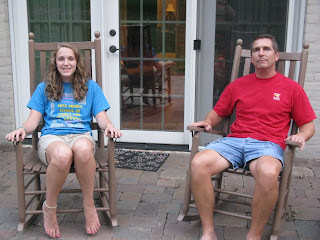 Finished!
After they finished, we headed to Woodloft for our summer birthday bash.  Woodloft is my mother & father's home. We celebrated all of the summer birthdays: Aunt Rose, Uncle Charlie, Uncle Cameron, Marcy, and Uncle Lewis.  It was a fun day of swimming and eating! 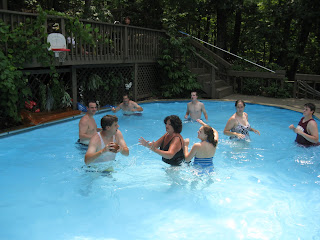 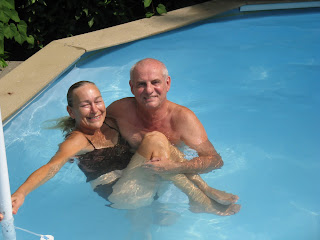 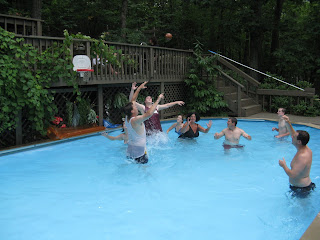 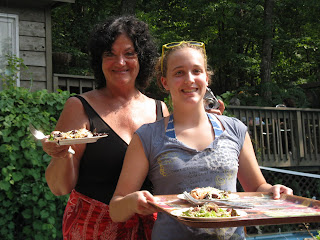 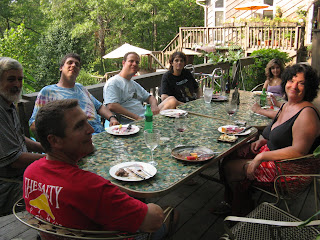 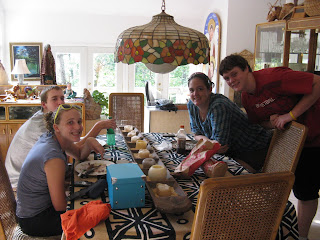 The kids chose to eat inside
Alli, Zack, Marcy & Beth 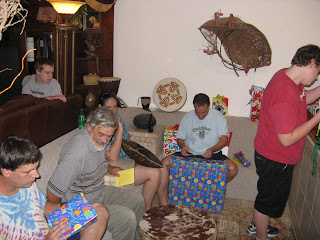 Birthday scene
Overall it was a great day!
Monday came and this meant Alli going to her first day of drama camp at Showtimers Theater. She looks forward to this all year. This is the 5th year she has gone.  More on that after the show on Friday. Zack went to the first official cross country practice at 8am and then to his internship that night.  Tuesday came and more of the same, drama camp and Zack to cross country run that night at Greenhill Park, until after the run. Zack's toe was severely infected!  He has such a tolerance for pain!! He ran with the team for over an hour.  When he got home and we saw him limping, he showed us his toe.  By this time he had a high fever and chills along with the swollen, purple toe with a black toenail and read streaks leading up his foot.  Of course we headed to the emergency room at about 9pm.  Luckily it wasn't a real busy time then and we got in pretty quickly and when all was said and done we were in bed by midnight.  He is now taking two types of antibiotics, soaking his foot 4 times per day, keeping it elevated and will have to see a podiatrist on Friday to have the nail removed and possible other surgery.
. 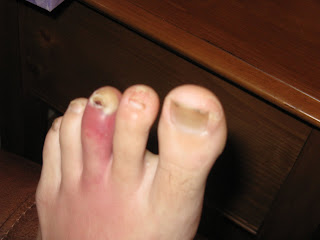 This is the day after the ER visit 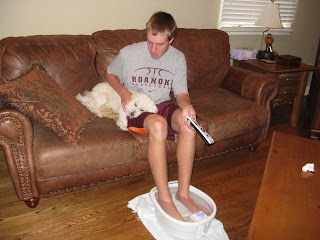 He was told not to work for at least 5 days. He is worried that Bojangles will be disappointed in him. He had to call in sick one day last week due to pinkeye, which we are now battling in his other eye.
I am thinking this may be the end of the cross country team for Zack but we will wait to hear what the podiatrist says.  We had Zack fitted for good running shoes at Fleet Feet and when his toenails began turning black, we went back and had them fit him again.  They were very kind but stuck with the fitting and said it was correct and they suggested we buy inserts for the shoes.  We did and then this happens! Poor Zack.
Posted by Kirsten at 7:22 AM 1 comment:

We have been up to a bit of nothing this week. Summer is flying by and I am very glad to report that both Zack and Alli have had a lot of down time, just being lazy, this week. Of course Zack has gone to channel 7 for his internship work for about 3 hours or so each night. He woke up with pinkeye on Wednesday so he was unable to go to his Bojangles job that night. Alli has gone to piano and open gym basketball. Otherwise, it has been lots of movies, computer/Facebook and just relaxation. 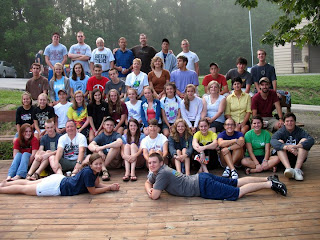 Cave Spring UMC ASP team 2010
There was a completely different story three weeks ago when both Zack and Alli traveled to Kentucky to work with Appalachian Service Project (ASP) on a mission to make homes dryer and safer. They worked very hard during the day and had group time at night. This was Zack’s third summer helping and Alli’s first. Our church takes a group each year made up of mostly youth. This year there were 49, 35 youth and 14 adults. I am so proud of them for doing this. They were assigned to a very poor county with much need. Also going on the trip this year were cousins Katie and Emily Printz from Sterling, VA and Alex and Nate Morrison from Haymarket, VA. Alex is Zack’s best friend from when we lived in Haymarket and he has gone on ASP with Zack each year. Katie is 16 and has heard them talk it up and decided to do this mission trip rather than the one she has done with her church in the past. Emily and Nate (and Alli) are 14 and you must be 14 or older to go. They have been waiting for this summer and age 14, so they could be a part of this program too. The whole group was divided into 7 teams of 7. Katie and Nate ended up being on the same team and so did Alli and Alex. Emily and Zack were on different teams. Each morning the teams went to their assigned homes and worked together. Alli’s team worked on flooring, drywall, ceilings and walls. The home she was assigned to included over 50 chickens, so she also fed the chickens. Zack’s team worked on ceilings and walls and he even had to play exterminator when his team ran into a nest of wasps.
Working in this poor community made Zack and Alli (and all of the teams) feel very fortunate and blessed. Also, it gave the youth a sense of accomplishment and of feeling that they are giving back.

Posted by Kirsten at 4:06 AM No comments:

Today began with our family going to the 9AM church service at Cave Spring United Methodist Church followed by the kids teaching Sunday School to preschoolers.  This was Zack & Alli's first experience teaching and really their first experience with preschoolers.  Neither were pleased with the experience.  They felt they didn't really know how to relate to children of that age.  I am sure they did better than they think they did.  Our youth leaders decided to have the youth teach the younger children this summer to give the adult teachers a break.  Zack and Alli are signed up for one more Sunday.
After church and lunch, Bubba and Zack golfed 9 holes at Hidden Valley Country Club.  It only took them one hour!  There weren't many golfers out since it is a bit overcast.  After they got back, Zack, Bubba and I went to the Salem Greenway, about 2 miles from our home, and ran 5.25 miles together. 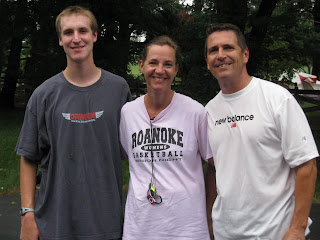 Zack, myself, and Bubba after the run.
This was our first run together.  Bubba and I have been running for fitness for years.  Zack recently has gotten into running and is even joining the cross country team at his high school.  I am glad that Zack is running and I hope he enjoys it for life. We had an awesome run, the temperature was only 66 degrees which is unheard of in August in Roanoke!
After we got home, Alli took Joy for a walk around the neighborhood. 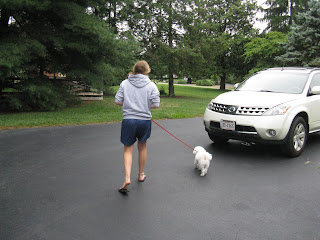 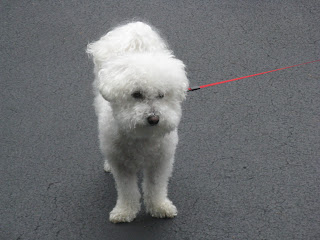 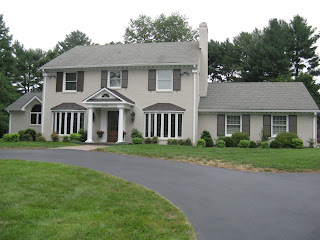 Our home
Later, Bubba is going to grill Tuna for dinner (as long as the rain doesn't come).  I am making a peach cobbler for dessert and we will enjoy a relaxing evening in.
Posted by Kirsten at 3:30 AM No comments:

Today, I finally began blogging!  I have been wanting to start a blog page for quite some time to use as a way to capture the memories of my family's day to day busy life. I hope the kids will enjoy looking back at this in the future.  I am married to a wonderful man, Bubba Printz and we have two exceptional children: Zachary and Allison currently aged 17 and 14.  Also, we have an adorable dog, Joy. She is a Bichon Frise that is 5 years old.  We are always on the go, each of us involved in many different endeavors.  Today is a typical busy but fun Saturday.  Bubba is already on the golf course (even though it is raining), Zack and Alli are both still asleep. As soon as the rain clears, I will run a few miles. Later, Bubba and I will be attending a few neighborhood get togethers, first an engagement party open house and then a visit to our next door neighbor's.  Zack will go to work at Channel 7 as part of his internship and Alli has plans to begin her second required summer reading book: The Tale of Two Cities.
Hopefully I will improve with this as time goes on.  It reads pretty dry today.
Posted by Kirsten at 6:36 AM No comments:

Check out my mother's blog